Woah, what a mental year 2017 has been so far. Most of it has disappeared already and we're heading into the best part, winter, and it feels like I've not managed to get much done. Yes, I was away for a couple of weeks to celebrate my 40th, and another fortnight in India for work, but I don't feel as though I've been as productive as I wanted to be.

It's been just over a year since I left the SHC, and my aim then was to focus on getting some of my own work done and out there. I have two books that I finished, but are nowhere near ready, and to cap it all off, I started one in January, only to put it on the back burner. Amongst all of that, was TRAPPED WITHIN. I've been blown away by the support of it, and even now it continues to simmer away, I'll be releasing some information on how much it's made for charity at the end of the year.

One thing is for certain, I've been able to knock out some short stories, some of which have appeared in a few anthologies already, and a couple more before the year is out. This includes, SOLID FOUNDATIONS, my first foray into the extreme sub-genre, which is in the VS:EXTREME anthology being published by Shadow Work Publishing. My wife usually reads my stories, but she has steered well clear of this, and for good reason, it is disgusting. Secondly, my story, GLASSJAW, is in Adam Howe's, WRESTLE MANIACS anthology. Writers often say they have favourite stories of their own, and this is probably mine. Really looking forward to getting that out there.

Went to Birmingham Horror Con on the weekend, and was excellent to meet up with loads of people from the world of Facebook. Some for the first time, others for the umpteenth. It is these sort of events that show what an excellent little community exists in the UK, and enjoyed catching up with people, and making some new acquaintances. I always judge a convention a success by two measures. The first is by hitting a monetary target, which I did in the first few hours, which took the pressure off. The second is if I manage to sell a copy of CELEBRITY CULTURE, my bizarro novella. It's a tricky one to sell most days, even more so at a horror convention.

Honestly, I can't see myself doing too many of these next year. For one, they tend to be over two days, which is one day too many. The Sunday tends to be pretty slow, and not really worth the effort. Unless anything crops up which I can't say no to, then I'm going to stash myself away and work on the projects I have lined up. One thing is for definite, the next CLASS FOUR book will be out next year. Anything beyond that will depend on time. I have an idea for a thriller, of all things, called THREE RINGS, which is bubbling away at the moment. I reckon I'll start that up when I've done some more zombies, as the second CLASS FOUR book is long overdue.

This year has showed me two things, one that I still need to focus solely on my own work, for the moment at least. I'm not going to be playing publisher for other people any time soon. That side of things does not interest me at the moment, plus, the amount of time needed to get someone else's work ready to publish takes time away from what I want to do. 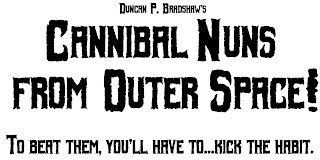 The other is that I love putting books together, and as the Kindle copies sell infinitely more than the physical ones, I'm going to approach this process a little differently. Starting with CANNIBAL NUNS FROM OUTER SPACE! (CNfOS), the physical books are going to be a kinda deluxe item. Expect colour interiors, hardback finishes, less adverts for my previous stuff, and more irreverence. The whole idea with CNfOS is that it's a straight-to-DVD B-Movie, so it has fake movie trailers, here's a tiny little corner of one... 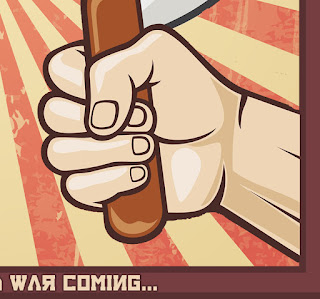 It has deleted scenes, four alternate endings and a Director's commentary. It's going to be put together so that those precious few people that want to buy the actual book, get something which I've put my heart and soul into. The same gubbins will be in the Kindle version too, but it will lack the gravitas that holding that physical copy will have.

Let's face it, CNfOS is not going to be a literary masterpiece, it is purely there to entertain. It's silly, OTT and anyone approaching it with anything other than this mindset, is going to be disappointed. It is though, going to be the culmination of a lot of hard work, and the point at which I start to be able to turn all of the ideas I get for my books, into reality. I envisage it being ready for the end of February/beginning of March next year, barring any unforeseen circumstances.

That's it for now, I'm hoping to get all the bits and pieces for CNfOS done soon, the brief for the cover art is being drawn up this week, the artist is lined up. 2017 may have been low on releases, but I'm going to make up for it in 2018, of that you can be certain.