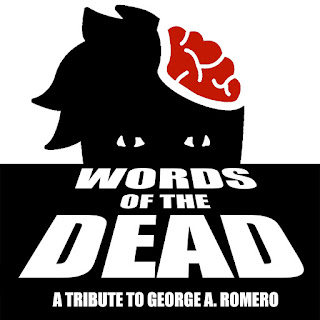 George A. Romero was an inspiration to many people, and the Godfather of the modern zombie sub-genre. As a tribute to him, and his work, we’re putting together a charity anthology, provisionally called WORDS OF THE DEAD, to honour the man who scared us witless when we were younger and inspired us when we got older. The guidelines are:

- We’re looking for zombie stories only.

- Stories must be either set within the films, or based on the canon he created. So, no runners, but remember that Romero used tool-wielding zombies in Night/Dawn/Day and Land, and the vampire/un-dead crossover in the comic series Empire of the Dead.

- One simple rule: as long as he used it, so can you. Show us something different from the films, or wow us with an original story set within one of the time frames or the modern day.

- You’ll get a digital and physical contributor’s copy as a thank you.

- This will be published through EyeCue Productions, with Duncan P. Bradshaw, David Owain Hughes, and Jonathan Edward Ondrashek as editors.

- No reprints, please. We’re looking for new stories, keen for fresh bodies to feast on.

- ALL proceeds will be going to charity; we’re working towards getting that sorted at the moment.

- Rights are your own, but we respectfully ask for a six-month period of exclusivity to the anthology from the release date (to be determined).

Send your submission or questions to: wordsofthedead@gmail.com

We look forward to seeing what you come up with!