Super to see you, though of course, I can't really see you, but if I were you, I'd do something about your hair, it's a bit...Einstein-esque today. Well it's Saturday, and it's time for the second interview over on this here blog. Today's guest currently resides in my hometown of Salisbury, has a majestic beard, was nominated for a BFS award last year and (annoyingly) is a bloody nice chap. It is of course, the man, the myth, the LEGEND: Rich Hawkins. 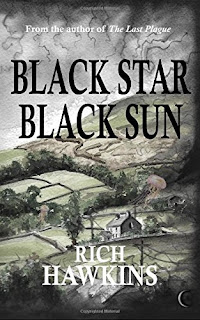 I, like most people, first heard of Rich through his acclaimed 'The Last Plague', and have snagged his other books to date, including the novella, 'Black Star, Black Sun'.

The conclusion to his 'The Last...' trilogy drops TODAY, so thought it an opportune time to probe him, intellectually of course, whilst The Last Soldier downloads on your kindle, because you have just bought it, haven't you? As before, my interview consists of two sections, equal part sensible and silly, just like me.


DB: I thought my cheese supplies were running dangerously low, pray tell, who the Dickens are you?

RH: I hail from the depths of Somerset, where my childhood of science fiction and horror films inspired me to start writing my own stories. I love cheese and coffee. My debut novel THE LAST PLAGUE was published in 2014, and since then I’ve released two novellas, several short stories and two more novels. I currently live in Salisbury, Wiltshire, with my wife, daughter, and pet dog, although we’re moving back to Somerset very soon. I write horror, and I love it. 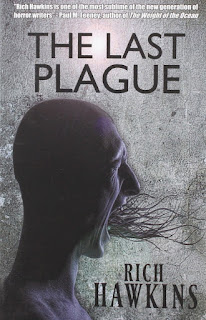 DB: The conclusion to The Last Plague trilogy, 'The Last Soldier' is upon us, how do you feel now that it’s all drawn to a conclusion?

RH: It feels a bit weird, to be honest. Bittersweet. There’s some relief that the trilogy’s finished and I can work on other stuff, but I’ve still got a hankering to return to that fictional world and add more stories to it.  Maybe in the future, who knows?
DB: Let’s say someone has lived under a rock these last two years, give them a quick rundown on The Last Plague trilogy.

RH: THE LAST PLAGUE begins with a mysterious virus that devastates Great Britain. Four old mates on a stag weekend (bachelor party, to our colonial friends) have to travel across the country to return to their families, all while trying to survive the outbreak and avoid the infected hordes roaming the land. THE LAST OUTPOST is set six months after the outbreak, and focuses on a few of the survivors trying to escape the mainland. THE LAST SOLDIER is set a year later, and involves a character from the first novel return to Britain in search of…something. I had great fun writing them. 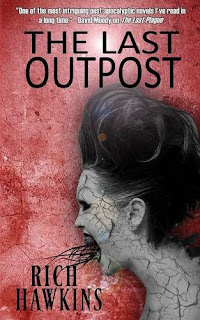 DB: How is The Last Soldier different than the other two books in the trilogy, did you have any particular aims or themes in mind when you wrote it?

RH: It’s a little different because the main characters are returning to Britain instead of trying to escape it. I wanted to complete the overall arc of the story and reveal the true nature of the Plague and its endgame. I hope I’m successful in doing so!

DB: When you wrote The Last Plague, did you intend it to be a one and done, or did you always have some additional books in the world in mind?

RH: When I started writing The Last Plague, I wasn’t thinking that far ahead, to be honest. But once it was published I began to get more ideas for other stories set in the same world, and it just went on from there.
DB: To say your stuff is bleak, would be like saying that the sun is quite bright, was this a conscious decision to write this way?

RH: As the novels involve the possible extinction of humanity and the end of the world, it was definitely a conscious decision! I lean towards the bleak side of horror anyway, so it seemed like the correct tone for the books. I do worry that sometimes my writing’s a bit *too* bleak, and it’ll put readers off my stuff. Maybe one day I’ll write something with a happy ending (not that kind, you perv). 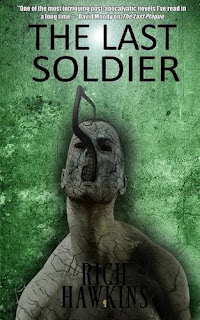 DB: The world and writings of H P Lovecraft are having a zombie-esque renaissance, you’re a keen fan of both sub-genres, what is it about them both that inspires you?

RH: I love the concept of ‘cosmic horror’ in Lovecraft’s stories – the insignificance of the human race compared to the vast cosmos, and the universe’s utter indifference to us all. Plus a lot of it involves cool monsters with tentacles. I’ve been a zombie nut since my youth, after watching Romero’s ‘Dawn of the Dead’, and I have a slightly unhealthy obsession with the end of the world, so anything apocalypse/zombie-related inspires me to create my own apocalyptic worlds.

DB: The Last Outpost was quite insular, with Royce’s journey being the main focus, whilst The Last Plague played off the camaraderie of the friends and was larger in scale, which did you prefer writing, and why?

RH: It’s very difficult to pick one. I enjoyed writing both, but if I was forced to give an answer it would probably be THE LAST PLAGUE, as it was my first novel and I had no idea where I was going with it. There was no pressure. I just had fun with it.
DB: What’s next for Mr Hawkins?

I have a few short stories due out in various anthologies this year. My vampire novella KING CARRION will be released in the next few months. After that, there’s another novella due for release in September.

DB: Will we ever see any more books/stories based in your ‘The Last…’ world, aside from your novella, 'The Plague Winter', for the Infected Books Year Of The Zombie?

RH: If I do return to the Plague world, it won’t be for a while. I may give it a few years and see how it feels. If not, THE LAST SOLDIER is a good end for the trilogy.

So...Rich, if that is even your real name, you have answered the questions which people probably think they want answered. I thank you, not just for myself, but for the two other people that are likely to read this. However, the real test of your prowess is yet to begin, bring out...THE QUICKFIRE QUESTIONS OF DOOM. (Totally trademarked up the ying yang btw) I need the first thing you think of…

DB: Weirdo. Upon opening a cupboard door, instead of finding your favourite tin of soup, you discover a pot noodle. What flavour is it?

DB: What weighs more, the futility of existence or a pillow case filled with spare change?

DB: You’ve been infected, bummer, if you could choose, what new appendages would you hope for?

RH: A mouth-tentacle with a razor maw at its tip. That would be cool.

DB: Whilst flying to the Isle of Wight, you crash land on an island, there are two survivors, Piers Morgan and David Cameron, who do you eat first, and what method of cooking do you employ?

RH: Piers Morgan, purely because he supports Arsenal. In terms of cooking methods, whatever causes him the most discomfort, I think. I bet he tastes funny. I’d have to boil the awfulness out of him. Same goes for Cameron. Horrendous men, both of them.

DB: Giving up the writing game due to a nasty bout of whooping cough, you form a band, what style is it and who are the other members?

RH: Doom metal. I’d be on drums, with Cormac McCarthy, Russell Crowe, Gillian Anderson, and H from Steps on whatever instruments they’re happy to play. Plus the three lads from The Sinister Horror Company as backing singers…
DB: Awww...seventeen people line up for a midnight showing of the entire Twilight films, how many could you shishkebob before the police taser you?

RH: All of them. Anyone who wants to watch those films in quick succession obviously has a death wish anyway…

DB: What is your current number one smell?

RH: The smell of my old hardback copy of Stephen King’s IT. Smells like history and Oxfam shops.

DB: Underpants…do you wear your own or sneak Sara’s on, and prance around the house pretending you’re a laydee?

RH: I never prance. I saunter. I wear my own, and they’re frilly.

DB: Is Daniel Marc Chant real, or a figment of your overactive imagination?

RH: I’ll ask him. He’s outside my kitchen window. I think he’s been rifling through my rubbish, as he has bin-juice on his face.

DB: That's not bin juice...I’ve just smashed your Charles and Diana commemorative plate, how do you exact your just revenge?

RH: I send Daniel Marc Chant to your house, where he will sing Uptown Girl in falsetto while wearing the mankini Sean Connery wore in the film ‘Zardoz’. That’ll teach you, plate-smasher.

There, I'm spent, but I think you'll agree that I grilled him good. So before Rich and I towel ourselves off, and settle down for a nice cup of tea, and watch Zombie Fight Club, we wish you a good day, an update on my writing is next week.

If you like the cut of Rich Hawkins' jib, and you really should do, head over to his Amazon page to peruse his wares, hit his blog up, or like the shit out of him at Facebook. 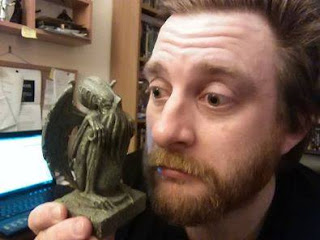