It's Saturday...I'm awake...it's time for an update on all things writing.

First off, it's the weekend ahead of the release of my third book, Celebrity Culture, and my first release which doesn't include the undead. Weird. It's also my first dip of the toe into the world of bizarro, and from the few people who have read it so far, it's gone done well, (cue double entendre). It is no coincedence that it is being released the day after the Oscars. One of my big bugbears is the world of celebrity, where every move is captured, every body function filmed and people who would struggle to do a proper job, are revered.

So this is my little poke at it, I hope that if you pick it up, you enjoy it, I had fun writing it, even if it was like pulling teeth at times. 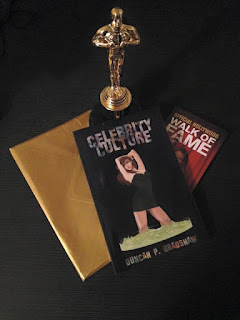 If you want to snag a copy, here are the links, as a heads up, we use Lightning Source, which Amazon don't own, so physical copies are held back by a week usually. If you are keen to get it, best to get through my website:

Work on Deadlock continues unabated, I'm up to 65k now, and had the option of taking a different path with it, which would've meant that the first draft would be finished this weekend. One of the joys of being a pantser. However...when I thought about it, I felt that it would then end up not being the book I set out to write. So have rewritten a chapter, and am now steering it back down the path originally intended. I do fear that it will be a bit of a beast...

The cover is being done by the amazing Stephen Cooney, who has done a number of exceptional covers over the years, most recently, Jim Goforth's Zombie Fleshcrave. Seriously, check it out HERE. He sent me through a sketch of the main character from the Deadlock cover, and it exceeded what I was after, and I'm a tricky person to please. 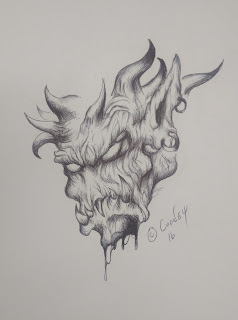 With the swerve on Deadlock, I'm taking a few days to re-centre myself, and then get back to it, may look to get a short story knocked up, but am undecided. I'm still umming and ahhing about what to do with Prime Directive, so have put it on the Kindle for the wife to read and let me know what she reckons. I'll then know whether it's a goer, or if I will hit up a mate to co-write it with.

So, exceptionally busy still, which is good, worked out that this year so far, I'm written 90k on two projects already, and with the plans for when Deadlock is finally done, it's going to be a mammoth writing year. I'll be taking a week and a bit off in June when we go on holiday, so hoping to get back from that and pick up on the second book in the Class Four trilogy, Class Four.

That's all for now, got a new interview with another author coming up in the next few weeks. Will give you a clue as to their identity...this could very well be 'The Last Interview'.

Take it easy y'all