An Ode To Stuff

It's Saturday morning, the sun is shining, and being the utterly miserable sod that I am, I'm in my office, sheltered from its annoying rays. Been thinking a lot about the actual act of writing recently, how one day, you can save your current WIP, and you think, 'you know what, there's some good shit there'. You even have a look back and allow yourself a chuckle at a witty exchange or wince from a particularly nasty death. Then you get the days when getting the words down is like pulling teeth. The laptop closes and you are filled with, 'why am I even bothering to do this?'

It's important to have support, in whatever form that takes, it is different for everyone. Up until recently, I thought it was one thing, when it is actually something else entirely. My wife Debbie HATES horror, can't stand it in the slightest, makes her squeamish, and it is just not her bag. Yet, throughout my writing, she's always asking when she can read the current project I'm working on.

Sure, some bits she skims over, one chapter in Class Three (fifteen if you're interested), she will not re-read at all, as she says it's too much for her, but she reads it. She is the first person to read through the third/fourth draft, when I'm happy that it's ready for consumption. There is a point to all of this (honest)...I read Stephen King's 'On Writing' recently, and he said that you write for someone else. Up until then, I assumed it was me. It's not, like Stevo writing for his missus, I realised that I was writing for Debbie.

With writing, once it is out in the world, the only feedback you get are reviews or comments on social media, but when Debbie is reading through my latest brain dribblings next to me, I hear her laugh, so can ask what she found funny. I see her squirm when she gets to the sick bits, and I see her puzzled face when she gets to something I haven't explained very well.

She is who I write for, and I think that is pretty damn cool.

So, what am I up to? Well, the first draft of Deadlock is done and currently sitting where I left it on the hard drive. I think I've done what I did with Hexagram, in that I started it off all serious, and then remembered that serious isn't my thing. The first few edits will restore order to that, plus...late last night, Stephen Cooney sent me the cover. Wanna see? Here it is... 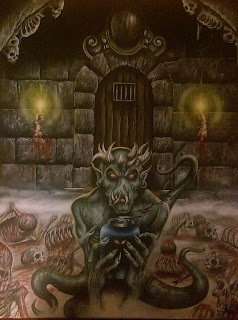 Pretty cool huh? Well, I think so anyway. It's a bit odd to have a cover ready for a book which won't be out until October, but hey. More on that in the coming months. With the first draft finally done, the plan was to have a few days off, finish The Division, then hit up some short stories. But try as I might, I just couldn't get into any of them. Then I had a flash of inspiration. There was a story about Rachel Riley from Countdown accidentally spelling out a swear word, then some wit on Facebook, posted this: 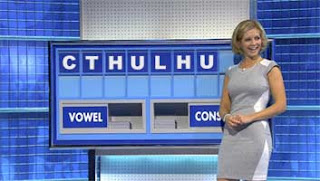 This got me thinking...what if a world-ending beast was summoned from some hellish plain accidentally. 'Summoned' was born. It's a working title, so likely to change, but another thing happened. Instead of trying to write it one way, I wrote it MY way. So far at least, the words are flowing from me like arterial spray, I'm loving it. It is also going to be a 'multi-narrative' book, I'd love to say it is a 'choose your own adventure' book, but it's not that deep, but there will be choices to make and different endings. Above all, it's going to be silly, like me. Plus...I'm hoping I've snagged the artist for it.

Prime Directive has had the Debbie treatment, and some further refinements. Re-reading it, I've found that there is a section, a couple of chapters, quite key ones, where I'm just not feeling it. My plan is to re-write them in a few weeks, so it'll be ready way before release at the end of May. I've always had a nagging doubt that something was missing from it, now, I hope I've identified it, and know how I'm going to fix it.

So we go full circle, back to what I said first off. The idea for Summoned, and even Deadlock came to me, and I liken it to a cloud. It lacks form, after chatting with Debbie, she made a suggestion for each, which made it go from being vague, to WOW, that will work. I'll go into more detail on these books in due course, along with Hexagram, which I cannot wait to share with you.

I'm just gonna leave you with this, sometimes shit happens, and you're wondering what the hell you are going to do. When all the things you thought were there, actually aren't. Take a moment to ponder, most of the time, when you look past all the other bullshit, you'll find that there is a constant standing in the swirling dust, and always has been. That is your support, that is the reason for spending your free time tapping words onto a screen, hoping to fuck that it will all make sense.

I'm off, got a couple of endings to write involving a giant apocalyptic beast, with seven arse cheeks, till next time.