In addition to my ramblings on what the hell I'm writing and doing, I'll also be posting up the odd (zombie) movie review, and interviews with other writers. The questions will be twofold, one set will be cutting and insightful, the other set...not so much, but will hopefully shine a light on their brain workings.

My first ever victim is the rather wonderful Kayleigh Marie Edwards. She came to my attention with her Ginger Nuts of Horror articles. At the time we were looking for contributors to Volume One of The Black Room Manuscripts, I approached her and was delighted when she said yes. Her story, 'Skin', was one of my personal favourites from TBRM1. 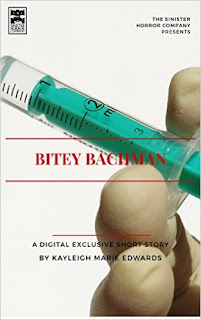 "If this doesn't raise a smile and have you double-checking your zombie apocalypse plan, you're probably already dead."

Her short story, Bitey Bachman, has just been released, and is a digital exclusive over on Kindle. I thought it prudent to try out my interviewing technique, and have stumbled upon someone as wonderfully weird as me, enjoy...

DPB - Hello! Who the hell are you and how did you get in here?

DPB - So, your short story, Bitey Bachman, is out on Monday, how did it come about?


DPB - It pays homage (of sorts) to a particular musical…what was the reason behind it?


KME - Well…. I like to be silly. The story is silly, the references are silly, and that particular musical is silly but in the best possible way. I didn’t mean to put so many references in there, it was only when I read it back I realised I’d punctuated sections of the plot with it! I drew a bit of inspiration from it (the absurdity of secret labs and whatnot), but mostly I just wanted to capture the camp feel of the whole thing.


DPB - It is clear from this, your Ginger Nuts of Horror articles and other stories, that you’re ‘quite keen’ on the undead. Is your writing process between zombies and ‘other stuff’ different?


KME - There’s a huge difference and I think it’s because I’m a bit weird.I can’t stand to read about or watch horror that’s all about human suffering. Monster stories? Yay! Stories of people turning mad and doing harm to themselves and those they love? Errrrggggghhhh that stuff makes me feel all dead and cold and unpleasant inside. And yet, that’s the stuff I write when I’m writing straight horror. It always goes that way, maybe because a full nervous, emotional breakdown and a descent into the most unpleasant mental states imaginable is what I consider the scariest thing that can happen to a person. When I’m writing like that, I genuinely feel depressed and I go through all these weird motions in my mind. And it takes me ages to finish that stuff.


But when I’m writing about zombies…. Yaaaaaay fun! Even if you care about the characters (I swear, if anything happens to The Walking Dead’s Carol….), you can only suffer so much if something happens to them, because the backdrop is pure fiction. It’s just straight, great fun.
When I’m writing, I feel like I’m in the zombie apocalypse, I go into zombie apocalypse mode. But the fun kind. And most of all, I get to write these totally ridiculous non-hero type characters that are inappropriate for other types of stories.

I wrote a play called Kill ‘em in the Brain about four completely different, but equally idiotic and silly people, and it was the most fun I’ve ever had creating something. It got staged twice by a very talented cast who added lines and gestures – it was like watching my kids grow up!


DPB - What are you working on now?


KME - Finding a house that isn’t full of damp. Do you have any idea how hard it is to find a house in the valleys that doesn’t have damp in the walls?


Work-wise, I’m currently on a review tour of haunted places around Britain. I’m visiting all these super cool, apparently haunted locations and writing up my experience, along with interviews with staff and a history of each place. It will be a series of video-uploads, blogs, reviews, and at the end of the year I plan to compile it all into a book. It’s also the basis of my PhD thesis – I’m interested in how the stories told about these places affect the experience for those who visit them.


DPB - If you were only allowed to watch one zombie film until the end of time, which one would you choose, and why…


KME - I’d love to say George A. Romero’s Night of the Living Dead because it’s an academically acclaimed beast of thematically challenging and poignant filmmaking, and the first undead zombie movie of its kind. But I’m gonna go ahead and say Rec., which was directed by Jaume Balaguero and Paco Plaza. It was the first zombie movie I saw that actually scared me, and I think the premise and set-up is cool. Edgar Wright’s Shaun of the Dead is a close second, and the one I’ve viewed the most times though – that film is a scriptwriting masterpiece!


DPB - Do you have any particular aspirations with your writing?


KME - All the aspirations. I’m not embarrassed to admit that I want to write a novel that deserves to be on the best-seller list, and/or a TV show that loads of people want to watch. At a minimum, I just want to make a living as a full-time writer. I’ve spent my life having people (even fellow writers) rolling their eyes at me for that, and I’ve spent years enduring jobs that make me not want to get up in the morning, but why should I? Why should anyone? Life is too short to have your soul crushed by the thing that takes up most of your week.


DPB - Excellent, you have proved yourself worthy of...THE QUICKFIRE QUESTIONS OF DOOM. You need nerves of steel and a sphincter capable of clenching in a quark from a Black Hole. I need the first thing you think of…


DPB - Ohhh, you're good, though the real questions start...now...favourite biscuit?


KME - Cow biscuits (or Malted Milks, for the less childish).


DPB - You decide to farm animals to manufacture your own brand of cheese, which animal do you milk and what novelty food do you serve?


KME - Oh gooooddddddddd. I’d love to say Halloween, as a horror fanatic, but it has to be Christmas!


DPB - It’s the end of the world, HOORAY! Who do you trip up first to help you escape from the ravenous zombie horde?


KME - The careers advisor from school who made fun of me for wanting to be a writer, and then kicked me out of her office when I asked her if ‘careers advisor’ is what she wanted to be when she grew up.


DPB - You are shopping in a supermarket, and discover a portal to another dimension. What do you throw through to test that you won’t be reduced to atoms?


DPB - You can make one band live forever, who do you choose?


KME - Your Protected. They’re the best band you haven’t heard of, but that you definitely should have. If you get the chance to see these guys live, they will melt your face off with sheer talent. If they were the last people alive while the world was ending, they’d probably produce a beast of an apocalypse track for the planet to die with.


DPB - There are only two pairs of shoes in the entire world, one stinks like a rotting animal resting in an open sewer, the other cuts off circulation to your toes, causing festering sores, which do you wear?


KME - I’ve recently worn a new pair that cut off the circulation to my toes, causing festering sores, and I ended up limping around in the rain with bleeding feet. I looked like something from Carrie. So, I guess it’s the rotting animal smelling ones.


DPB - Odd numbers or even numbers?


KME - It depends on if they can be divided equally by the number 3. 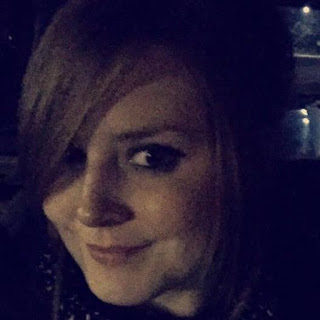 So there you have it, equal parts Michael Parkinson and Avid Merrion, thanks to Kayleigh for stopping by and eating me out of mini pizza. If you haven't already, pick up Bitey Bachman today, it's a rather cool take on the zombie apocalypse. Check out Kayleigh on her blog over at

Take it easy y'all