Get your ass to Mars

Hoping you are well and enjoying your weekend? Two weeks huh? What the Dickens have I been up to, well...

The novel, Deadlock was put on the naughty step, as I hit a brick wall on it. Think I was trying to write it too straight, if you've read my stuff, you know there is an element of humour in it, and looking back through it, it's missing, and my initial get up and go, well, went.

However...it hasn't been dead time. Whilst I reprimanded it, I started (and finished) an (as yet) unnamed novella. (More brackets? No) It's a sci-fi/horror story centred around the first manned mission to Mars. It's coming to the end of the trip, and the resident geologist, miffed that all she has discovered is egg smelling rock, sets off to the Galle crater. Whilst there, she makes a few revelatory discoveries.

Needless to say, things go a little awry, and the crew are forced to fight for their survival. The true history of not just Mars, but also our own planet is revealed, can the survivors stop the destruction of everything they know? If the Galle crater rings a bell, here's a little picture of it: 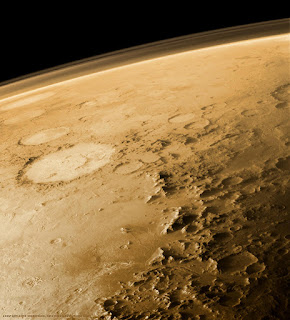 It's also referred to as the 'smiley face' crater, and fans of Watchmen will recognise it. Hey, if you want to set something on Mars, may as well reference one of the best comics/graphic novels of all time huh?

That needs to be edited, but I'm going to let it settle for a few weeks before I go back to it. There are so many potential little holes I could've missed, that I need some time away from it, before heading back.

I'll be getting back on Deadlock in the meantime, and already have the cover image formed in my head, and the dude in mind who will hopefully be able to bring it to life. More info on that when it has been formalised.

Elsewhere, I am over the moon to be part of Matt Shaw's Easter anthology 'Easter Eggs and Bunny Boilers'. The list of authors involved is a who's who of modern indie horror authors, to be in their company is pretty awe-inspiring, but also a little shit your pants scary. I've written the story for it, called 'Hey-Zeus', and that is currently off with Mr J.R. Park, to see what he makes of it. I don't want to give much away on it, but it's a retelling (of sorts) of the Easter story, just done my way.

You can pre-order it right now, it's Kindle only, but an absolute steal at 99p/cents;

Finally, the physical proof for Celebrity Culture is winging its way to me, and is now available on Amazon for pre-order. It's £4.99 in the UK: http://www.amazon.co.uk/dp/0993534600 and $6.99 over in the US: http://amzn.com/0993534600 I'm really looking forward to this being released, though will be a lot more low-key than my other books, not for any other reason than Bizarro is a niche market, and this will definitely not be to everyone's tastes. Not because of the content, but just because it is pretty out-there. Still, if you fancy seeing what my brain is capable of coming up with, please do.

I'm gonna get back to reading through Deadlock again, and try to get back into it. Really cannot wait for the books that should be winging their way out to people this year. Have a BONZER weekend, catch ya on the flipside.

Dunk
Posted by Duncan P. Bradshaw at 05:42 No comments:

Decided to blog more regularly, so that all three people who have a slight interest, can have a butchers as to what I'm up to. It'll be a mix of stuff, and will undoubtedly veer wildly depending on mental state.

First up, my first foray into the world of Bizarro, Celebrity Culture, is confirmed to be released on 29 February 2016. The cover was done by the excellent April Guadiana. I loved the cover she did for Adam Millard's superb Vinyl Destination, and along with the Doof Warrior image, (which adorns a t-shirt I frequently wear), have been looking to find a project to use her talents on, if you missed it, here it is: 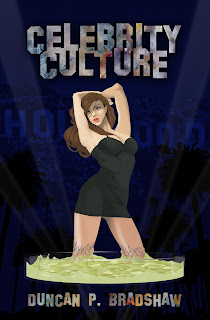 The synopsis is: It's the thirteenth annual Lou Gehrig awards. Four B-list celebrity virologists vie to claim the Locked In Syndrome cup and get mulched down to form their disease for mass distribution.

A disease hipster takes centre stage on a night when a blast from the past threatens to turn his ordered, pus filled life upside down. In order to blow open a deep rooted conspiracy, he must team up with a disgraced one time child star who wants another shot at the big time, and clear his sullied name.

Together, they’re going to show people the real meaning of a meltdown.

The kindle version is ready for pre-order already, right here:

The digital version is at the princely price of 99p/$1.49, purely because my principle is that any novel I release will be £1.99/$2.99 and novellas will be cheaper, because quite simply, you get less words. The physical copies will be ready for preorder soon too.

I'm also 20k into the new book, now called 'Deadlock', it's about a chap who joins a crew on a jewellery heist, but ends up having to fight through hell. Early days yet, so still evolving, (I'm not much of a planner) but there are some pretty nasty bits in it already, might be my most gruesome writing to date. Provisionally, am aiming for a July release, so it ties in with our run of convention appearances.

Typically, I've also had another idea running around, it's gonna be a novella I reckon, and a touch of sci-fi in it. This is provisionally called 'The Entity', and will write it after the first draft of Deadlock is done.

Nothing quite like being busy huh? That's it for this week, I've just gotten off a Skype chat with the other Sinister Horror Company chaps, and this year is going to be MENTAL. Cannot wait for you to all see what we have in store for you.

Take it easy, and have a good one.

Dunk
Posted by Duncan P. Bradshaw at 04:51 No comments: