I hope you all have had a bloody marvellous Christmas? Mine has been spent mainly at home, for the first time since me and Debbie have been together, which has been pretty cool, though I am looking forward to getting my lazy ass off the sofa and doing something in the next few days. Not now though, I'm enjoying catching up on some video games and planning on what I'm doing in 2017.

But wait, you can't look forward, until you've had a bit of a look back, so, 2016, what happened? All in all, it's been a pretty good year. Released four books, all pretty different from one another. I feel that with each one, I'm getting a little bit 'better', or at least starting to feel like I have an idea of what works for me, and what doesn't. I've also written a fair few short stories, which have been included in various anthologies, a couple alongside some fairly big 'names' within this mad world of writing I find myself in.

I've got my own favourites from my releases, it's only natural I think, but ultimately, that is of little importance. Everyone is their own animal, and what one person likes, another one yawns at. All of them though, whether they were 2,000 words, or 88,000, are shaping my writing, and that can only be a good thing.

I never planned on writing CHUMP, if I'm being honest, and it was only being invited back as a guest to the excellent Festival of Zombie Culture, that made me write those stories. Not sure if the lack of pressure helped, but they were definitely among the stories I enjoyed coming up with the most this year. As a consequence though, it did mean that I stopped work on a novel when I should've finished it up.

But, it does mean that I've written two books already for 2017, both of which need reworks and editing, but it's nice to have a bit of a jumpstart on things, even if they will need varying amounts of work before they are ready.

Along with the traditional books, I've released my first audiobook, my short story, 28 SECONDS LATER. 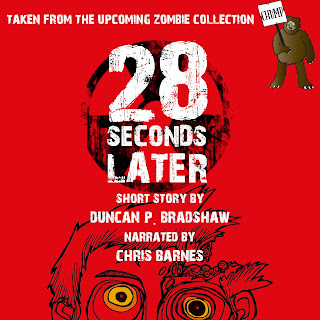 I wanted to see what the process was like, how popular it would be, and to get a teaser of my new book out in the world, in a different format. It's something I'd definitely look to do again, but will see what would work well in this format, as not all books would I think.

A number of people I know collect their short stories up, and release them in their own collections. I personally won't be doing that. I get why others do, you may as well do something with them, right? If it's not doing much in one anthology, why not chuck it in with your other stories and release it? For me, I have a few bands which I LOVE, so much so, that I quite enjoy tracking down rare version of songs, or B-sides (if you remember what they are). This is the approach I am taking with my short stories.

For example, TIME FOR TEA, in the first Black Room Manuscripts, is pretty cool. Perhaps it might be worth liberating it, the same with I-SPY, my story which went out with a newsletter, never sold on an outlet. Surely, it would make sense to chuck all of these into a single tome at one point?

For me, no. If some poor sod wants to read everything I've ever written, they can track them down. It would make finding that mobi file worthwhile (maybe), or picking up a charity anthology because a story of mine is in it, something to savour.

I've been lucky enough to be invited into anthologies, I see some writers offer reprints, and that's fine. For me, I would always want to write a completely original story. Why? So that whoever gets it, reads something by me which can only be found in that book. I think that makes it pretty special, though I realise that I am far from the level where anyone would want to track down everything of mine that has been published.

It's why I keep a bibliography on my website, mainly for me though, I have to be honest :-)

So what I have enjoyed reading this year? My personal favourite book of 2016, is BERZERKOIDS, by MP Johnson. I'm gonna say now, I'm not a big fan of single author collections (says the man who released his own zombie-themed one), but the cover alone was enough for me to get it, just look at it: 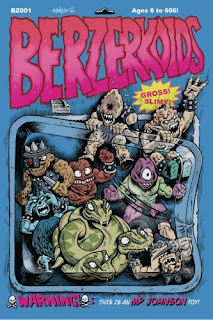 With the cover art by Bill Hauser, it grabbed me before I had even read one story. It didn't disappoint. The story 'EX-PUNK' is probably the best short story I've read in a long time. So if you like bizarro and a smidge of horror, go pick it up HERE.

I read loads of good books though, THE LAST SOLDIER by Rich Hawkins, rounded off the excellent 'Plague' trilogy. HELP! A BEAR IS EATING ME, by Mykle Hansen is one of the best books I have read in a long time too, genuinely laugh out loud hilarious. Dark Minds Press have consistently knocked it out of the park this year, with a slew of novellas. Both KIDS by Paul M. Feeney and RUIN by Rich Hawkins (again), were standout titles, and with Laura Mauro on the horizon, I really cannot wait to see what they bring out next.

One of the books I managed to read, was a purchase from the end of 2015, Adam Howe's, DIE DOG OR EAT THE HATCHET, three novellas in one product. Each as different as could be. Both the titular story, and DAMN DIRTY APES, were excellent reads. The former has one scene which even made me feel a bit uneasy, which is quite rare.

I also managed to get round to reading some classics I've never managed to. Both 1984 and ANIMAL FARM were as good as I imagined them to be. FEAR AND LOATHING IN LAS VEGAS reaffirmed my love for fiction and film, the same with FIGHT CLUB. However, there is one thing this year that has stood out...

Being an avid gamer, this generation of gaming has seen so many lame ducks being released. Either buggy as shit, or simply broken, Watch Dogs, I'm looking at you. I kinda got used to it though, you know? However, this year, it has happened to me with a number of books I have read. First off, let me state the obvious, I get that people like different things, okay? Really, I do. If you know me, you will know that whilst I am steadfast on what I like, I fully accept that other people usually like different things, it's cool, I like finding out why.

There must be at least five books this year which were released, and lauded by review sites, big and small, and other readers, so much so, that I went out of my way to get my mitts on them. I'm part of this community, I wanna see what's hot, ya know? Time after time though, I was left disappointed. Again, see the point above, I get that we all like different things, but I wondered why it was that I didn't get on with them.

Perhaps they were too literary, too obscure, too safe, I don't know, all I know is that from now on, I'm going back to what I used to do, getting and reading the books that appeal to me. I like to mix it up, I don't stick to one genre, but I'm not going to get sucked into the hype surrounding a book, and then walk away after, trying to think of one good thing to say about it.

As for music, there have been some cool albums released in 2016, I didn't get to as many gigs as I would've liked, but I did find some new bands. My top five albums of this year are:

1 - BLINK 182, California. To think I nearly swerved this album entirely, is so weird, considering how good this album is. I'm a HUGE Tom Delonge fan, and the first single off California, didn't convince me that they were better off without him. I was chatting to Glenn Rolfe on Facebook, who said that this is the best thing he'd listened to all year. So I got it. He was right. It is the best thing they've released since their self-titled album a decade ago, it has everything that you want from Blink. Long may it continue.

2 - ARCHITECTS, All Our Gods Have Abandoned Us. If this list was on sentimentality alone, this album would win. It's soaring, abrasive and invasive, and so very, very good. Metalcore can be derided, not by me I would add, but this album is ridiculously good, and needs to be listened to.

3 -THE QEMISTS, Warrior Sound. This album was released on my birthday, and I loved the first single from it. But that was it... It fell out of airplay on my iPod, until September this year, when I put it back on again. It blew me away, it's definitely a grower, and one of those albums to help you get from A to B, whilst ignoring the world.

4 - MOBY AND THE PACIFIC VOID CHOIR, These Systems Are Failing. I love Moby, but have skipped most of his stuff over the last few years, this album though gets back to what I love about him. It is catchy, loud and fills your head up when you listen to it.

5 - SLAVES, Take Control. I didn't think that they could possibly top the last album, and whilst it does fall short, it is still outstanding. They've tried a few things out, not all of it works, but by god, when it does...

There you go, that's what I enjoyed in 2016, it has been one of learning, as it should be. I feel I have a better grasp of what kind of writer I am, and what I like to write about. I'm also out on my own now, so previous limitations have been lifted, though I now have to work even harder than before. I've had periods during the year where I wonder why I do this, and I think that is par for the course. We're not in this for the money, but as a way to get something out into the world, for people to consume.

I know that my style is not typical, and I'm an acquired taste, which will alway limit my appeal. But then, who am I writing for? Me. Anything else is a bonus, though at times, that is not the easiest thing to see.

One final thing to sum up 2016. The people. I've met some marvellous people this year, both through Facebook, and around the country at conventions. Not just that, but I've also gotten to know better some people that I've known for a little longer. Without exception, it has been my honour to speak to you, chat bollocks, and build up our friendship. I am not going to name names, as that is a little self-defeating, but chances are if you're reading this, you're on that list. Writing is very insular, and all these things help keep me going, so thank you.

Which leads onto one obvious question:

Well...that's one for next time, the appropriate juncture, New Years Eve.